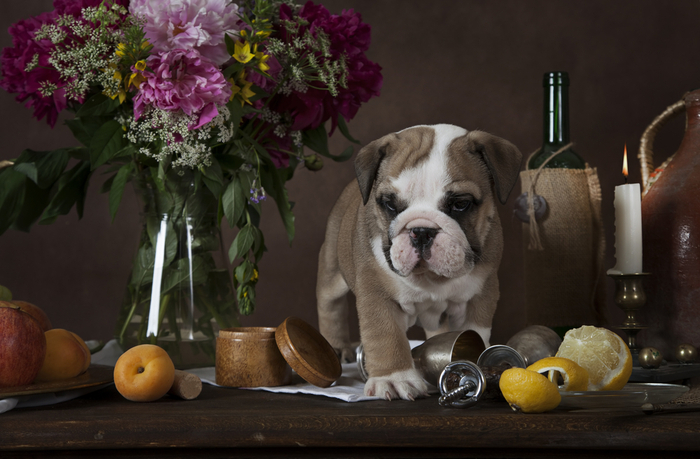 English Bulldogs are a bundle of adorable wrinkles, a smooshed face, and full of personality. It is easy to see why you would pick this sweet puppy. As a new English Bulldog owner, I am sure you have many questions. One of the first questions often asked is what type of food do I feed this rambunctious little furball? Well, we have sifted through hundreds of foods and come up with the 11 Best Foods for an English Bulldog Puppy.

An English Bulldog puppy has a lot of growing to reach his adult weight of 40 to 50 lbs. When you pick up your new puppy, it should be at least eight weeks old and fully weaned. Make sure you ask the breeder what food the young puppy is currently eating, and you will start with that food.

Your Bulldog puppy won’t eat much at first because he is so tiny, so it is essential to feed your pup about three to four times a day. The multiple feedings help him grow and maintain his blood sugar levels, which is crucial for a young puppy. Gradually, as your puppy grows, you will reduce the time it is fed and increase the food until, as an adult, your English Bulldog will eat only twice a day.

Coming in first as the best puppy food for English Bulldog is Halo Puppy; this food is a high-protein food that appears to work well with the Bulldog’s sensitive stomach and, due to its shape, it is easy for the Bulldog’s mouth to pick up and eat. Following a close second as the best puppy food for an English Bulldog is Diamond Naturals puppy food, which is a veterinarian’s recommendation, and it is inexpensive compared to some of the other foods. It specializes in gut health and immunity, which is vital for your young Bulldog. However, every food I picked had at least a 4.5-star rating with excellent reviews. So, find what fits best for your puppy from this great list of the 11 Best Foods.

Halo states that it is natural and contains 35% protein, and it appears that it does. The first three ingredients were a protein chicken, chicken liver, and eggs. It was followed by some healthy grains; though it did contain soy, all the early ingredients were meats, fruits, or vegetables. The kibble size and shape are also manageable for your Bulldog puppy to pick up and eat. The advertisement and reviews stated that the proof is in the poop, which can be an issue for a bulldog’s sensitive stomach.

So, I reached out to the owner of a very healthy-looking English bulldog and asked them what they were feeding him. Halo food was his choice. When I asked him why, he stated that his English Bulldog willingly ate the food, and his poop was healthy. I guess this moved this food up on my list.

This puppy food is made with lamb as the first ingredient, followed by healthy grains, eggs, fruits, and vegetables. It also contains probiotics to help keep your Bulldogs immune system and gut-healthy, crucial things for your puppy.

I placed a call to my veterinarian, and this was the food she recommended – she is an owner of several dog breeds, along with an English Bulldog, and this is the food she has found to keep her dogs healthy.

This food label doted an easy-to-read and understood label, and yes, it was. The first ingredient was chicken, followed by oats, barley, chicken liver, carrots, and eggs, all excellent choices of proteins and grains.

The food advertising was interesting because it stated it is all human-grade ingredients made in a human food facility. So, if more natural food is what you like, this is the way to go. I did find that the kibble appeared a little large, which would make it easy to pick up but more challenging to chew for your little puppy; carefully observe your puppy and make sure it is not a challenge.

This food also comes as a dehydrated powder that you add water to reconstitute the food. It might make it easier to mix the two for your puppy.

Royal Canine was the only food that I found that was made breed specific. It stated it had high protein and probiotics, both important for your puppy’s development. Though I have to admit I didn’t particularly appreciate that the first ingredient was chicken meal instead of a whole protein, followed by brewer’s rice, brown rice, then wheat fillers.

On a positive note, it has a unique shape, making it easier for the Bulldog’s short snout to pick up and chew, an essential consideration for the Bulldog puppy.

This is a limited ingredient puppy food and starts with salmon, a good protein source, but then goes to a salmon meal, another fish meal, added grains, and vegetables. So, even though it was advertised as limited, I did not find it to be that; it still appeared to be good food compared to others. It also has a wet food variety that can be healthy for your puppy if you mix it with wet and dry food.

This brand started with salmon, a very healthy protein, then went to rice, followed by additional proteins. It also has added Omega fish oil which is beneficial for skin and coat. So, this brand hit on some essential features for a bulldog puppy. The English Bulldog tends to have a sensitive stomach and itchy skin; these characteristics in food are important.

If you find that your puppy is sensitive to chicken, this food can be a great choice. It is made from beef and no poultry by-product meals, corn, wheat, soy, or artificial flavors, which is a benefit for a sensitive Bulldog.

I have to admit the commercial was really cool and showed wolves running – and stated, bring out the inner wolf in your dog. However, the sweet English Bulldog puppy is not a wolf and tends not to be very active. So, too many calories in your puppy would be a concern for healthy adult weight.

Taste of the Wild could give Bulldog puppies the right blend of high-quality protein. Its first ingredient is salmon, followed by a salmon meal; then it has various vegetables and fruits. This food did not contain grains, corn, wheat, or artificial flavors, which can cause sensitivity in puppies. It could be a great choice if you find your Bulldog puppy is showing signs of allergies.

The first ingredient was a deboned beef, followed by a turkey meal – a protein meal is all of the animal ground up. Several other proteins and vegetables then followed it. This food advertises 55% protein and healthy fats, and the additional 45% is fiber, vitamins, minerals, and other natural ingredients. It also contains glucosamine and chondroitin for healthy joints and omega fatty acids for the skin; both are important for a Bulldog puppy’s growth and development.

IAMS has been around for a while, and according to the advertisement, it was made with real chicken and had ingredients that make it like mother’s milk. So, it is considered excellent for bone development and includes omega 3 for brain development. The first ingredient was chicken, but it was immediately followed by whole grain corn, a filler. It is also advertised as the number one food recommended by veterinarians, so I called my vet, and he stated that good puppy food for a medium to large breed was what you should feed your Bulldog, and he did not name this brand.

I have to admit I was not too thrilled with seeing the first ingredient as a chicken meal and that it contained wheat. The kibble was round and relatively large, so your Bulldog should be able to pick this up easily. The reviews stated this food smelled, but the puppies were crazy over it, so it could be great for a picky Bulldog puppy. Although this food was recommended, it quickly found its way to the bottom of my list.

You are on a fun, crazy adventure with your new English Bulldog puppy. This list of 11 of the best puppy foods was researched to help you find the best food for your puppy. Read the list carefully and choose the perfect food for your bulldog puppy’s needs.

Also, find a good veterinarian in your area so they can help you with the specific needs of your puppy. Most of all, have fun with this bundle of adorable wrinkles that is now your companion for a long time.

Bulldogs have sensitive stomachs, frequently have diarrhea due to the sensitivity, and a quick change in food can easily cause problems for your puppy. Always start with the food your puppy is currently eating from the breeder and keep them on this for a couple of weeks while they adjust to the changes in their young life. Then you can begin to switch foods; the process takes about ten days and is very gradual.

After that, your puppy is entirely switched to the new food. Observe throughout this process for any gastrointestinal upset like vomiting or diarrhea. If the puppy exhibits these signs, you may need to go even slower with switching the food.

Some of the same characteristics that make the Bulldog cute can cause problems in this sweet puppy. That adorable smooshed face and a wrinkly, short snout causes a plethora of health issues.

The Bulldog’s smooshed face is called Brachycephalic, and all bulldogs have some degree of Brachycephalic Airway Syndrome (BAS) due to their short snout and pushed-in nose. The breathing issues can cause your Bulldog to breathe loudly, get short of breath and gulp extra air while eating. The gulping of air can cause gassiness.

The features of that cute face can also make it difficult for your puppy to eat. Food should be considered not just by its high protein and nutrient level but also by the kibble’s shape, so your puppy can pick the food up and eat it.

Bulldogs are also known to have allergies. It is often triggered through food, and having the wrong food can cause itchy skin, fecal issues, excessive shedding, and ear infections. So, if possible, most bulldogs do better with an ingredient-limited food that avoids corn, wheat, soy, and artificial ingredients.

Puppy food comes as frozen food, dehydrated food that you add water, wet, and kibbles. The most popular of these is kibbles, due to the convenience of the dried food. However, not all brands are created equal. So here are the top eleven that we found.

The best Great Dane puppy foods (a list of our picks)

Best Doberman puppy foods (a list of our picks)

Best Boxer puppy foods (a list of our picks)

Please keep in mind that we may receive commissions for any external links on this website that you may click. However, this does not impact the decision making process for content creation and display on the website. We try to keep things fair and balanced for our readers, so that the readers can make the most educated decisions possible.

Jaxery is an Amazon Associate that earns commissions for purchases.

Jaxery is a Chewy affiliate that receives commissions for purchases.